Notice: Due to Covid-19 Pandemic, Medicine Grove clinic is closed. 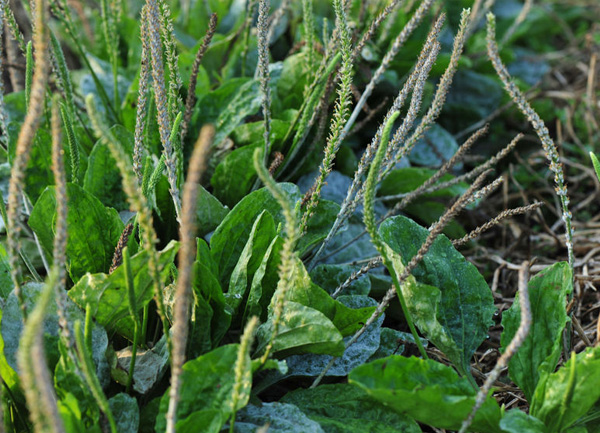 Back to Blog Posts

Have you ever wondered what herbs are in your backyard? If you’re like most people, it’s probably something you’ve never thought about. Thankfully, my herb nerdiness is here to add some medicinal plant trivia to your day. As the summer approaches, we’re going to start talking about weeds. In fact, we’re going to discover a love for the weeds in our yards we didn’t know we had. We might even stop calling them weeds altogether. All of these plants have rich stories, and as we get to know them, hopefully we’ll start to develop an appreciation for local plant diversity and medicinal uses. Often, if we think of herbal medicines at all, we think of something exotic, such as Silk Road spices, or rare Amazonian plants. Hopefully, we’ll see that medicinal plants are all around us.

So, what’s in your backyard?

In recognition of all of the phlegmy coughs that have been going around this spring, this month we’re going to talk about the common plantain. There are many species of plantain – the ones we’re talking about are Plantago Asiatica, Plantago Major, and Plantago Rugelii, all of which have similar qualities. I’m sure you’ll recognize it right away. This little guy is everywhere – from city parks to waste areas.

Plantain is an herb that regulates fluid metabolism. So, its use is called for when fluids aren’t moving correctly. Fluids can stagnate due to excess or weakness of the body (or both). In this case, the use of this herb is indicated when fluids are stuck due to excess, which would look like some kind of inflammatory, or infectious process, presenting with thick, yellow, sticky phlegm, or cloudy, frequent urination.

The seeds and the leaves have been used in different cultures for similar, but slightly different effects. While the main function of both parts is to promote urination and drain fluid from the body, the indications are slightly different. The leaves, in general, act as a mild diuretic, draining fluid from the digestive and excretory organs, whereas the seeds have a pronounced diuretic effect, and also clear yellow mucus from the lungs.

If we look at the experience of different major herbal medicine traditions, we can get a more complete picture. Let’s take a look at primarily the Chinese and the Greek/Islamic, with some supporting evidence from other European and North American sources.

The herb used is the seed of Plantago Asiatica, (Che Qian Zi 車前子).  The seeds are used to:

*Plantain seed shouldn’t be used in cases of excess, clear (cold) urination, as it may cause weakness in the body, lack of urogenital tone, and excessive urination.

The leaves “constrict the canals and tissues of the body”, and thus have a “drying quality”, and are indicated for inflammation of the skin, mucous membranes, and glands.  The seeds are indicated for coughing of blood, and stomach/duodenal ulcers. (Avicenna Canon of Medicine Volume 2: Natural Pharmaceuticals, 299 - 302)

If someone without measure thoughtlessly eats many different foods, and in so doing damages his liver as a result of the juices of those different foods, and causes his liver to be injured and harden, then this person should take small amount of Coltsfoot tussilago farfara (d. Huflattich, mhd. Minner hufladecha) and twice as much Plantain Roots  Plantago Major (d. Wegerichwurzeln), and just as much of the sap that surrounds the Pear Mistletoe Viscum album (d. Brei, der um die Birnenmistel ist).

I’ll put the full text and translation below in case anyone is interested. But, what’s interesting to note, here, is that the combination of herbs in this passage all have the effect of relieving congested fluids by promoting urination, or causing expectoration of phlegm.

500 years later, Nicholas Culpeper (1616 – 1654) would write that the juice of Plantain, “prevails wonderfully against all torments…in the intestines or bowels, helps in the distillations of rheum from the head…is an especial remedy for consumption of the lungs, or ulcers of the lungs, or coughs that come of heat.” (Culpeper’s Complete Herbal and English Physician, 141).

Here we see not only the organs that the common plantain effects, but we are also presented with an image of what a person feels like who suffers from these conditions, namely, we see the description “rheum (water) in the head”. That’s old-timey speak for cloudy headed and dizzy.

Finley Ellingwood (1852 – 1920?), of the Eclectic School describes its use in, “glandular disorders…ulcerations of the mucus membrane…diarrhea, dysentery…cholera infantum, and where there are longstanding hemorrhoids…Inflammation of the intestinal tract when it involves the mucus membranes and is accompanied by colicky pains will be relieved by plantago.” (American Materia Medica, Pharmaceutics, and Pharmacognosy, 380 – 381)

Modern Western Herbalism uses Plantago Major, and this schools’ experience echoes most closely that of the modern Chinese, namely, this herb promotes urination and expectoration of phlegm from the lungs to clear the mucus membranes (lungs, digestive, and excretory organs) and to relieve inflammation. Therefore, it is used for burning or cloudy urination, diarrhea, ulcers, and bronchitis with cough, especially if any of these conditions also manifest with blood.

So, as you can see, there seems to be a nice agreement on all sides on Plantain’s actions. To sum it up further, if I were to use this herb in the clinic, I would expect to see someone who is either coughing thick, yellow mucus, or has a deep-seated cough, but is unable to actually get anything out, while also having a red tongue with a yellow coating, and a rapid pulse (heat signs). It’s an even better indication if the person also has uncomfortable, difficult urination (too much, too little, or hesitant, with possible discomfort).

Not that you’re necessarily going to be picking plantain from your front lawn, but, if you wanted to, how would you do it? The leaves can generally be harvested any time in the growing season. The seeds are harvested when the stalk turns brown, when they can be easily stripped from the stalk. But, get up early, because if you’re going to collect enough seed for medicinal uses, you’re going to need a lot! A typical daily dose is around 6 – 9 grams.

Pictured: A lot of work

If you’ve actually gotten this far and collected 9 grams of seed, you’re going to want to tie it up in a coffee filter and simmer for 35 +/- minutes. (If you don’t tie it up, you’ll quickly have an undrinkable, mucilaginous mess). The resulting liquid would be consumed slowly throughout the day. Now, strain it and divide it in thirds, and drink 1 third, 3x/day. Hopefully, if you’ve paired your herbs correctly*, you’ll get rid of that phlegm in no time.

*As with all herbs, the other herbs you pair it with make all the difference in how it behaves. If you have any questions, be sure to ask – it’s a very complicated subject.

DISCLAIMER – The information on this site is provided as an information resource only, and is not to be used or relied on for any diagnostic or treatment purposes. This information is not intended to be patient education, does not create any patient-physician relationship, and should not be used as a substitute for professional diagnosis and treatment.

"If someone without measure (restraint) thoughtlessly eats many different foods, and in so doing damages his liver as a result of the juices of those different foods, and causes his liver to be injured and harden, then this person should take small (amount? Type?) Coltsfoot tussilago farfara (ch. Kuan dong hua, d. Huflattich, mhd. Minner hufladecha) and twice as much Plantain Roots Plantago Major?? (ch. Che qian gen, d. Wegerichwurzeln), and just as much of the pulp/slime that surrounds the Pear Mistletoe Viscum album? (ch. Related to Hu Ji Sheng??, d. Brei, der um die Birnenmistel ist).

Cut the herbs in small and thin pieces. Bore a hole in these pieces with an Awl or other small tool. Paint the pulp/slime of the Pear Mistletoe into the holes and place it in pure/clean wine.

Then cut an amount of leaf or small twig from a walnut tree, the weight of a coin, as big as a bean or a strawberry, and put this in (take this with) the wine. Drink this after breakfast, or on an empty stomach.

The warmth and the cold of the little Coltsfoot takes the swelling from the liver. The warmth of the Plantain prevents the liver from coagulating and hardening. The cold of the Pear Mistletoe reduces phlegm, and the mass of leaf or small twigs of the Walnut, through its bitterness, removes the incorrect juices that harm the liver. These additions are not cooked, but only soaked in uncooked wine, so that they more successfully and gently get to the liver.

Whoever has such complaints should also often drink Mulberry wine, because the pain of the liver frequently comes from an excess of blood, which the warmth and softness of the Mulberry wine softens and eases, because it is in some way related to the blood.

One should also eat one’s food mixed with vinegar. The warmth and sharpness/spiciness of the vinegar causes the liver to contract. One can also eat the wheat bread, (which people often make dried pork shoulder sandwiches with), and soak this mixture of bread and pork shoulder in wine, then eat this bread. Because, when the dry juice of the shoulder is leached out by the warmth of the wine and is brought into the bread, then this bread causes the     liver to contract, and keeps it from swelling. However, don’t drink this wine, because the wine has also absorbed any harmful qualities in the meat.